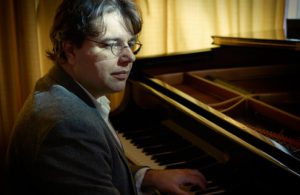 During my music studies I  started playing quite a lot of gigs with alto saxophonist Benjamin Herman at Café Alto and Bourbon Street in Amsterdam. Later there were concerts at De Kring at the Leidsche Plein. I worked with my own sextet and we played at The Ivrea Jazz festival Italy.  I visited New York City and shared stage with a lot of  musicians like John Swana, Essiet Essiet and Tim Armacost at places like Smalls and Augies. With Benjamin Herman and Jasper Blom we formed the band ‘Five up High’. With this band we performed in the Netherlands, Belgium and at numerous festivals like the San Sebastian Festival in Spain.

In the mean time I worked with ‘The Ben van den Dungen-Jarmo Hoogendijk quintett’. We toured in The Netherlands, Germany and many other countries. We performed at The North Sea Festival, The Hague. Drummers John Engels (Chet Baker) and later Owen Hart junior (NY) were present in this band. With the band ‘Brand New Orleans’ we integrated African rhyhmical elements in our music. Again with Benjamin Herman and DJ ‘Graham B’ we performed  (I played the Rhodes piano)  at ‘The Soul Kitchen’ in Amsterdam. (Beats with improvisation)

Then there was ‘Eveline and the Groove Movement’. A combination of jazz elements, Rap and Hip Hop music. Some believe this band was one of the very first Acid Jazz bands. (Before the genre actually became popular)

For me an interesting project for ‘Codarts’ in Rotterdam was a collective improvisation with piano and dancers.
With Bird Award winner saxophonist  Toon Roos I travelled though Spain.
I have had the privilege to perform with players such as Elvin Queen, Bob Berg, Benny Bailey, Chris Potter, Pat Metheny and Tom Harrell.

At present I am performing with ‘living jazz legend’ flugelhorn player Ack van Rooyen (Ack van Rooyen/JurajStanik duo) and with my trio. (The Juraj Stanik Trio). I work as a sideman with various international (jazz) artists.